Edward Kelly has studied paintings in churches his whole life, principally frescoes, which are locked into the fabric of buildings. His first venture into this world was the St Dubricius Polyptych which now lives permanently in Madley Parish Church. Later on the Lilies of the Field Triptych was permanently installed in the beautiful chapel below.  It explored how paintings using latest pigments and materials can be introduced into an ancient English church and integrate with the architecture in C21st painting language.

His latest installation has been in Hereford Cathedral; sixteen enormous panels breathe life into the oldest biblical narrative, Adam and Eve.

This Exhibition at Artwave West features the re-worked version of the Adam and Eve paintings that have been created especially for this show. The original panels being simply too big to display, these new paintings on paper will give the viewer an insight into this most significant body of his work.

Edward Kelly on the painting of Adam & Eve

Adam and Eve stands as one of the most colourful narratives of all time: there is sensuality, nudity, animals in harmony, good & evil, food for young and old. The paintings are a celebration of colour and shape, sixteen apples, twenty one creatures, three Eves, three Adams, eight flowers, four snakes, all partaking in the great joy, the dance of life. Most of the time whilst painting the guide is impulse: issues such as getting the red right and in doing so understanding what is meant by getting the red right.  The paintings are essentially colour led, colour that is fully charged.  Heeding impulse rewards the artist with deeper understanding and greater surprise. I initially painted a nude woman in red. In my next panel I painted an apple tree and only then did she become Eve and out tumbled sixteen panels. The panels are arranged in four groups of four: each panel has independence, only Creation might have been painted on one large canvas.

The entire Adam & Eve narrative begins at the top left of the first panel. A single star plummets through the cold silent void. The hand of God enters, white, curvilinear, aloof from the rectilinear heated redness of this world. God sparks the DNA, electrifying the star and so begins the roller coaster of life. Panel 2, Adam writhes in the agony as he is formed from the dry dust, as if decomposition is being reversed; dry bones, then clinging flesh, as laid in a rectangular sarcophagus.  Here my references are a transcription from a Crucifixion by Cimabue in Arezzo.   Desiring to unite image to rectangle becomes more overt & acute on a panel with a ratio of approximately three to one.  Here the resistant thrust of the bodies of both Adam and Eve are pushed and nudged, the arms and legs bent and manoeuvred within the perimeters, the  hands and toes dislocated to arrange them  within. The figures are made of two reds, bright red which is factual, set against its opposite magenta, which is ephemeral and transient. In panel 3 the Tree of Knowledge becomes magical when set in phalo blue. The full impact of the red is induced in panel 3 by the thud of the dark viridian of the snake. The snake writhing accentuates the rhythm of Eve’s loins in the adjoining panel and echoes in rhyme with the DNA in panel 1. The snake has a human/animal-like head, a form of intriguing tension used by previous painters and of course the seducing devil is ever present in each work, below primordial fish dart in the black river. Originally, each panel of Adam & Eve was painted separately surrounded by the studio wall. There is a different tensioning when the panels are joined in close juxtaposition; the snake leers lecherously, its head inches away from the spiral breasts of Eve. This warm red, the stuff of blood, underscores the entire polyptych and removes it from the language of naturalism into the world of symbol, a symbolism further accentuated by the great variance in the scale of the imagery, ignoring perspective.  After years of drawing in the life room with the rigours of proportion these figures are fundamentally not this discipline. In panel 4 Eve is portrayed as a sensual, sexual being in a raunchy posture. Her newly awakened face is blank, without history.  What is most important is the sense of heat and movement, touch and feeling. Eve unabashed, unfurls blood-red and warm, awakened by an exotic dove, encompassing and inducing desire, the mother of the world.

The Garden of Creation

Originally only two panels, five and eight, had the snake spiralling down their centre, when panels six and seven were introduced pieces of snake in the first & fourth twist became isolated: I left this fracture to illustrate the history of the process of the making of the paintings. The magic blue tree thrusts its way upwards and embeds itself in all the panels. I had previously made a series of plates in the ceramic studio of Julie Turner decorated by animals, so animals were ripe for the picking, cockerel, hen, hare, squirrel, deer, bird, dog and goat, as well as fish in the river, readily jumped into the painting.  Each is emblematic of their species but isolated in its own space. The fragmentary nature of each exaggerated by the small brush strokes and detailed dark markings signifying the interior nature and separateness of limbs. All are then bound together by the giant slithering snake which is thirty feet long. It has a goat-like head which concertinas and makes sinister serpentine shapes. The River Wye flows by my studio and I know that the fish swim below. I see some of these animals daily and so, in a way, the Garden of Eden exists here in Herefordshire. I could not resist including the crocodile, following a close encounter with one whilst in North Africa. The blue tree can also be seen as the river of life, as well as in the form of crucifix. In the panels as a whole I alternate from white on red to red on white.  The mighty apples echo into space – this is the painter’s game: are the apples large, thus near, or ginormous species in the mid distance.

The Garden of Eden is prelapsarian, in existence before the stress and beat of time, and the faces of Adam and Eve are free from worldly fatigue. In panel ten, Eve in tripping gait bears the mighty fruit.  In panel eleven, Adam, with vacant stare, has already received his fatal apple from Eve.  There are no inhibitions about nudity in the garden; Adam’s legs are askew and, together with his acrobatic genitalia, demonstrate the dance of life in perpetual utopia. All forms joyously expand but there is one in static opposition: the serpent, a skull, harbinger of death, which looms above whispering temptation. Edge is critical in painting as in reality it is always changing. I hit on a curious answer to this by placing splodges of red then cutting a line through them, which decorated the form whilst giving sculptural separation, allowing them to act as a symbol of the very pulse of life itself.  The painting demanded the ever-increasing girth of Eve’s bottom, which in turn excluded the apples originally held at her hip, thus forcing her arms to be raised upwards, bearing the fruit at shoulder height; again, the splodges of red help isolate the arm from the shoulder, solving foreshortening. Adam contemplates the apple, the forbidden fruit.  It is the eleventh hour, near midnight. The moment he bites into the apple, the world of eternal life and youth disappears. Eve & Adam, like king and queen with laurel crowns, are framed by gigantic flowers. For Eve panel nine has dancing curvaceous anemones. For Adam panel eleven has the angular blooms of bird of paradise but also a soft violet pansy. The explosive violence of the yellow in the bird of paradise signifies the end of utopia. There is a different formal concern in each group of four panels:  here the issue is of figure and ground, the division of canvas favours the object that fights to occupy the little remaining space. Rhyme is ever present; the leaf shapes of Adam’s crown are echoed in the nostrils and malevolent eyes of Satan.

The final act of heavy drama unfolds with the Expulsion of Adam and Eve, the great gateway of Eden is flung open, then the doors slam shut. Reading left to right in panel thirteen; we have the division of the hemispheres, an epic described in but a few words in the book of Genesis. Top left: the hand that giveth and the hand that taketh away, maker of life & death.  The maker of the stars, then the heat of the day: the sun as flower and in the cool of the night the moon & fig leaf – the fig leaf free from its inhibiting role. The repetitious shape of the lily, a symbol of procreation, becomes a heraldic hinge, allowing the first two panels themselves to appear as the doorway to Eden. In panel fifteen Adam is nearly nine feet in height, bending into panel sixteen, but held within the perimeter of the canvas. The viewer’s eye level is 1inch from the bottom of the canvas. The gates of Eden are in narrative form sixty feet high, so the depiction abruptly drops near to far.  Quivering and lost in the lower left corner is the young dove with its mother signifying the fragility of life.  The snake coils his slithering way from the thirteenth to the fourteenth panel, leaving a sulphurous green trail, the complementary colour to the major red. It curves upwards like a baroque frame, and with its defiant head arrogantly challenges the procreator. Adam’s hand pulsates in multiple rectangular facets as flesh and blood contrasts with the hand of God drawn in sweeping curvilinear form.  Adam’s gigantic legs stumble with the bones depicted, lending themselves to the analogy of future X- ray radiation. His body is turning blue, now violet; the flaming swords of the angelic guardians of Eden piercing his neck as they drive him headlong from the Garden, so that head first he tumbles into the adjoining final panel, number sixteen, where he is propelled extreme right, emphasizing the lateral stretch prevalent in the entire painting.  Eve kneels below. She is still delectable, protected under the umbrella of Adam. I was intrigued that I could stylize Eve’s body thus reducing the curvature of her thighs to points at the knees. Both heads stare downwards in shame and sorrow. The two heads echo the affection of the doves, stressing a narrative diagonal route. Adam’s green eye sees the future.  Banished from utopia the fall of man ensues. Death will follow. 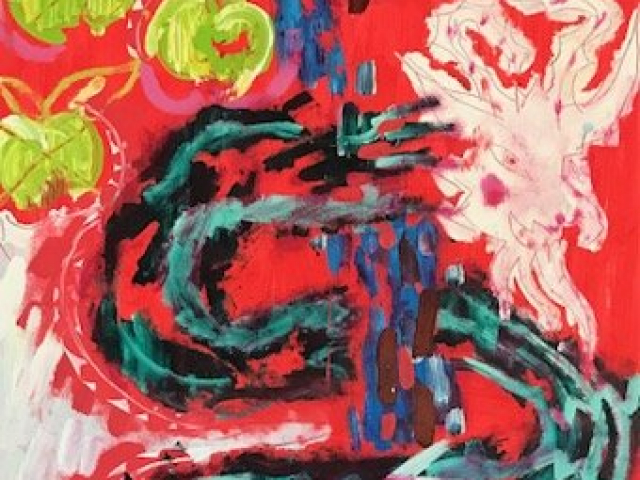 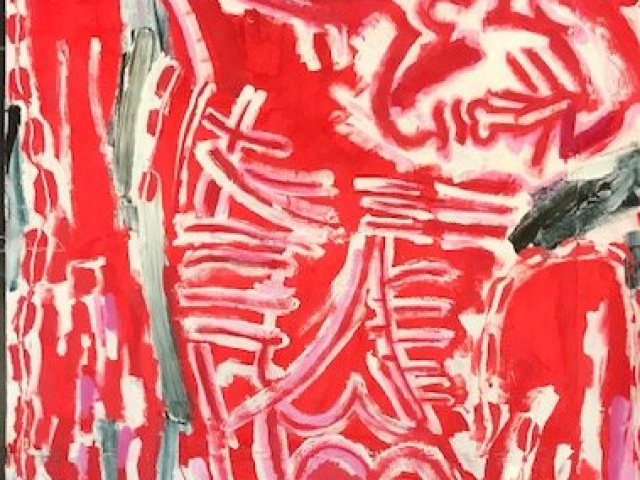 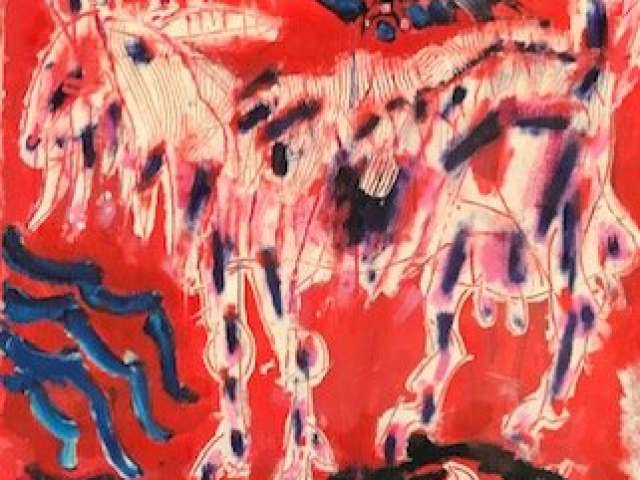 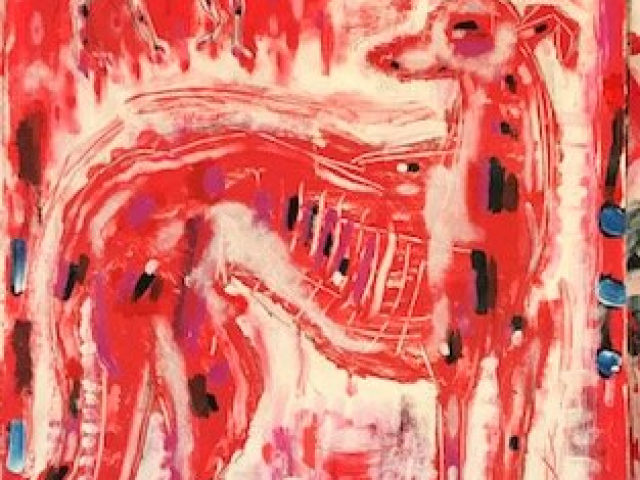 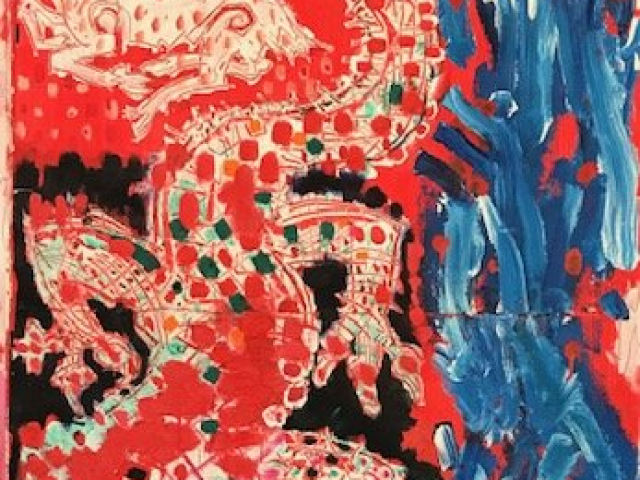 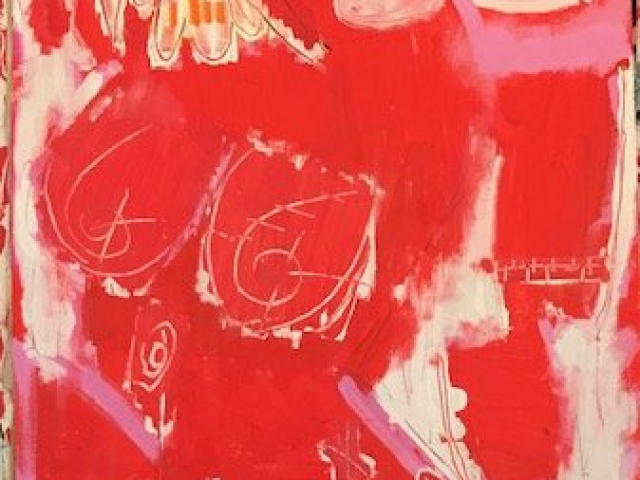 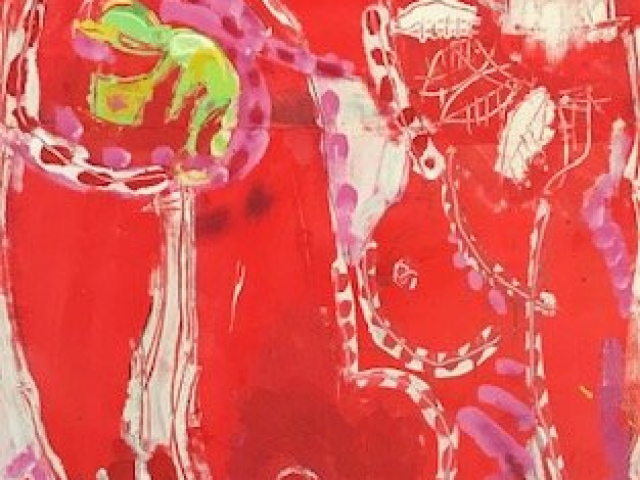 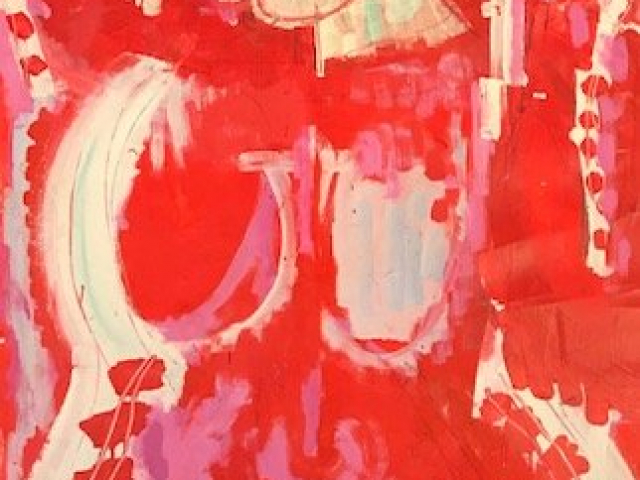 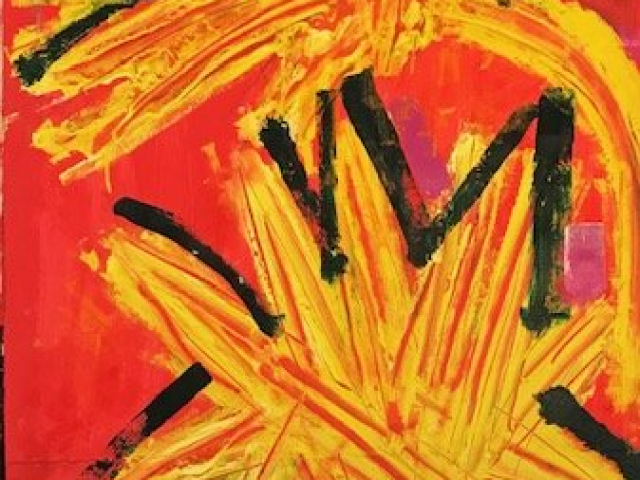 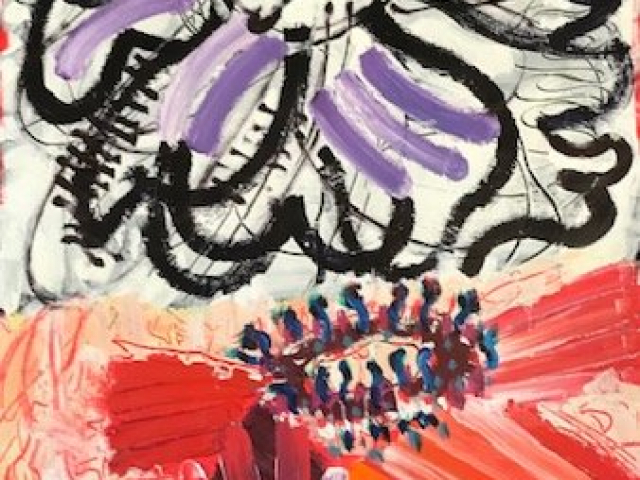 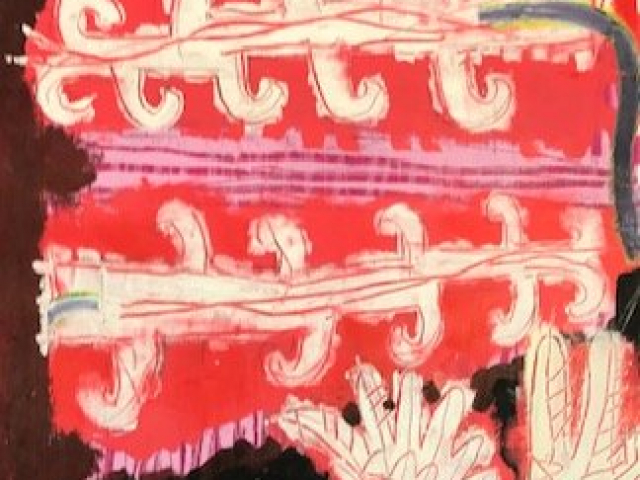 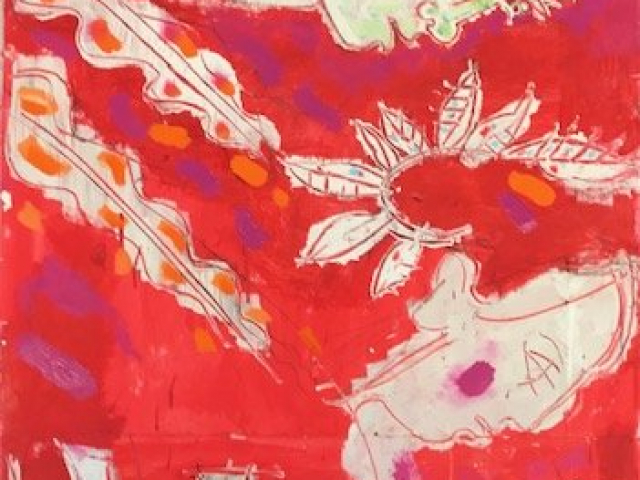 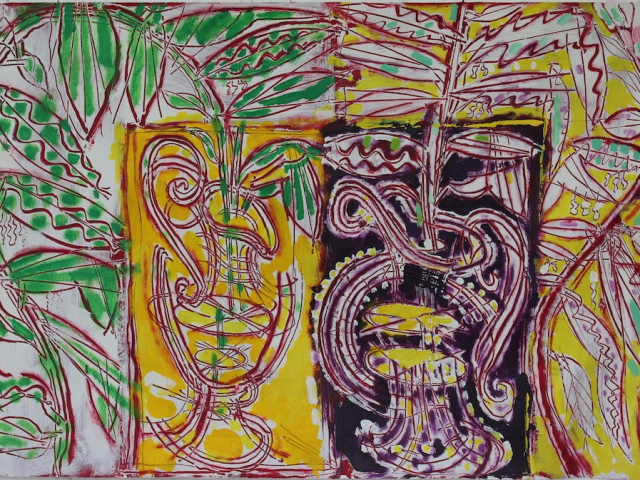 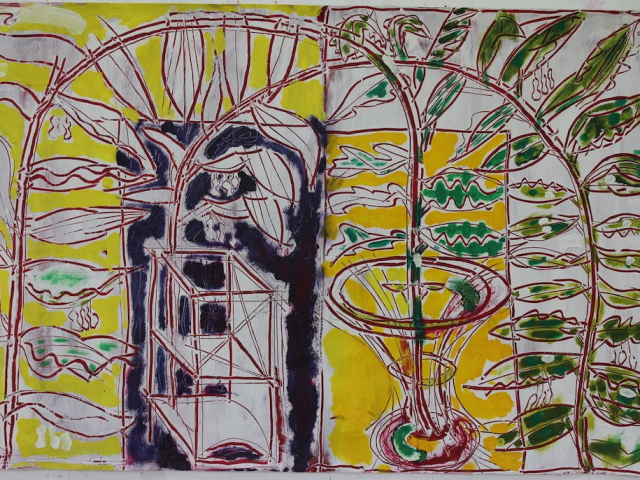 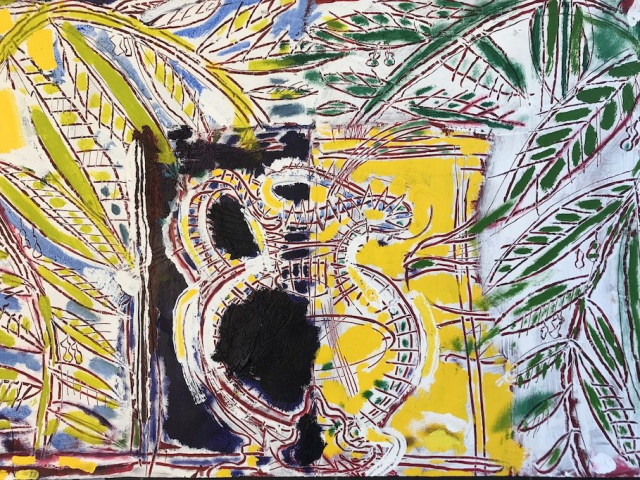 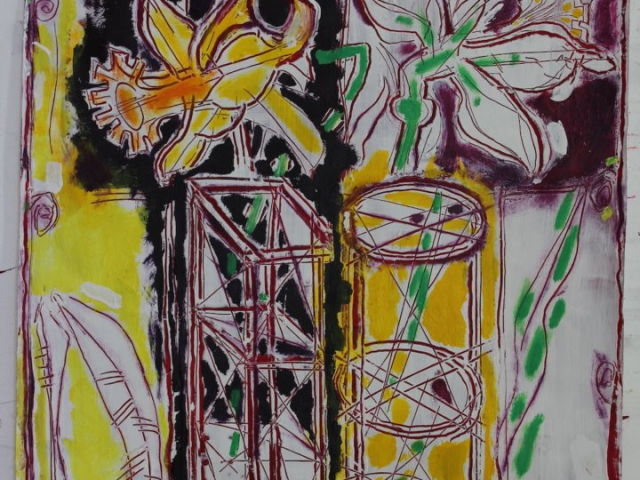 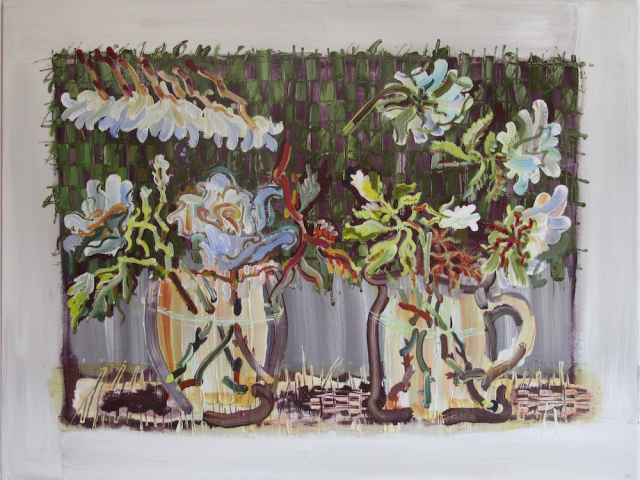 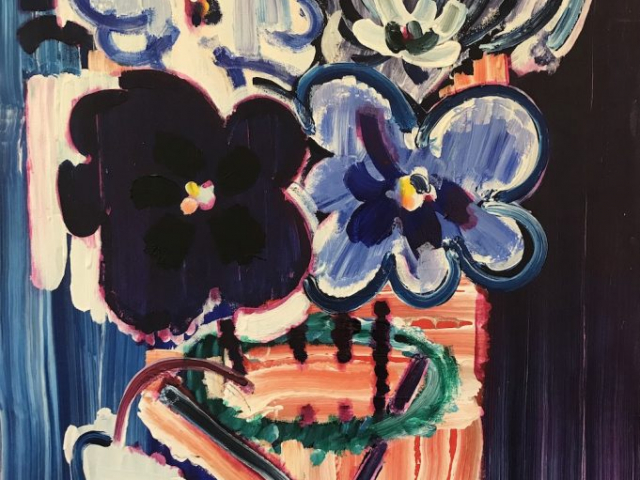 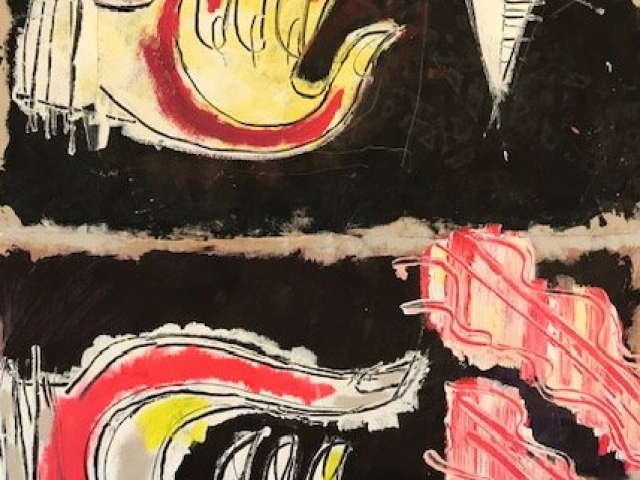 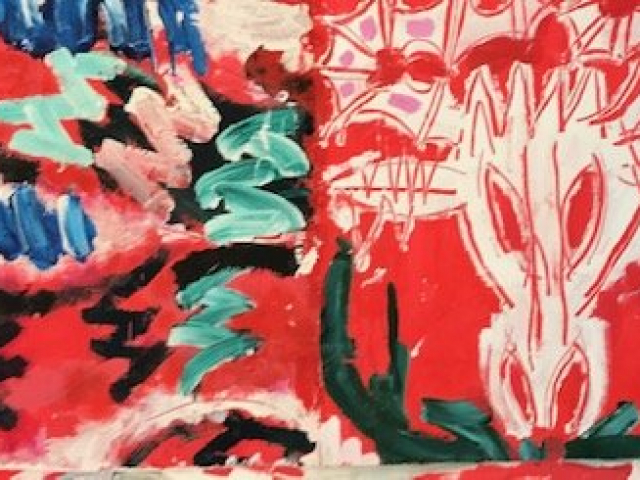